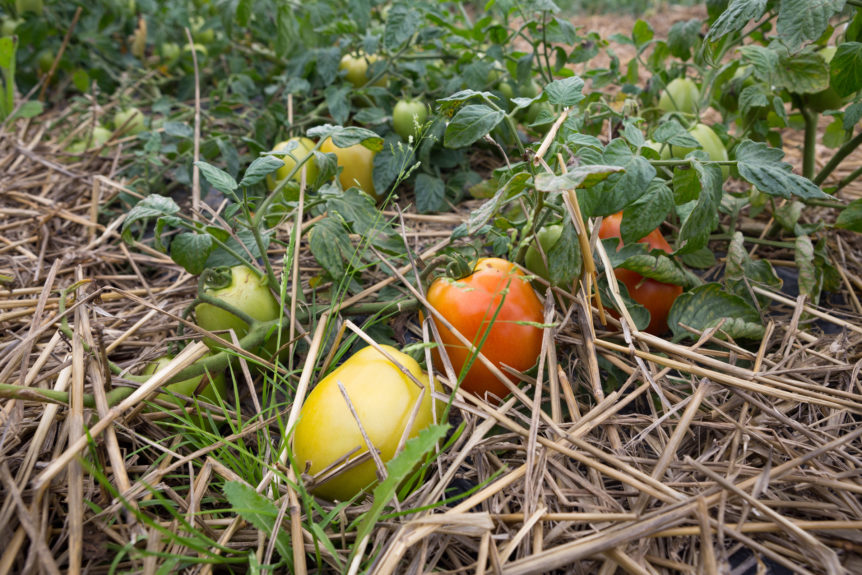 Both types of mulch discourage weeds, but organic mulches also improve the soil as they decompose.

Inorganic mulches don’t break down and enrich the soil, but that doesn’t necessarily mean they’re not a smart option for your garden.

Spread a wood chip or shredded leaf mulch anywhere on your property, but it looks best in flower beds, shrub borders, and garden pathways. Of course, it’s right at home in a woodland or shade garden. Keep in mind that wood chips aren’t a smart choice for vegetable and annual flower beds since they’ll get in the way as you dig the beds each year.

Grass clippings are another readily available mulch, although it’s a good idea to save a portion of the clippings to use as a natural lawn fertilizer. When you have remaining grass clippings, use them as nitrogen-rich mulch in vegetable gardens.

If you’re planting a vegetable garden, consider covering it with straw, salt hay, or weed-free hay. Not only does it look clean and crisp, but this type of mulch retains soil moisture, prevents weeds, and adds organic matter to the soil when it breaks down.

Give your compost another purpose: If you have extra to spare, use it as mulch. It will enrich the soil and make plants happy, but keep in mind that when any kind of mulch is dry, it’s not a hospitable place for plant roots. That means you may want to reserve your compost to spread as a thin layer around plants and top it with another mulch, such as chopped leaves.

Mulching a vegetable garden with sheets of black plastic film can do wonders. When it’s spread tightly over a smooth soil surface, black plastic transmits the sun’s heat to the soil beneath, creating a microclimate about three degrees warmer than an un-mulched garden. Because the plastic film remains warm and dry, it protects the fruits of vining crops such as strawberries, melons, and cucumbers from rotting. And, of course, the mulch prevents weed growth and retains soil moisture.

There are two cardinal rules for using mulch to combat weeds. First, lay the mulch down on soil that is already weeded, and second, lay down a thick enough layer to discourage new weeds from coming up through it.

A four-inch layer of mulch will discourage weeds, although a two-inch layer is usually enough in shady spots. If you know that a garden bed is filled with weed seeds or perennial roots, try a double-mulching technique to prevent a weed explosion. To do so, set plants in place, water them well, spread newspaper, and top it with mulch.

To get all the mulch you need click over to our online SHOP!